I am proud and pleased to share with you my recent interview with popular author, editor, writing coach and former columnist for “Bloom Where You’re Planted” at Coffeehouse for Writers.

I’m a big fan of Noelle’s work, and starting in September, I’m betting you’ll be too, when she resumes her column here at the Coffeehouse.  Please join me in welcoming her today.

1. Did you always want to be a writer…how did you know for sure?

From as early as I can remember, I wanted to be a writer. The story my mother always told, probably apocryphal, was that at four months old I stood up in the crib crying not “Ice Cream” but “Book-a! Book-a!” And my parents obliged with many books, crayons, paper, and later pencils, pens, and notebooks.
How did I know for sure? Because I wanted to write and kept writing—stories and poems from the age of 11, which I kept carefully in 6 by 9 lined-paper notebooks (I still have them and mean to write an essay about them). I wrote through all of public school, the tortured adolescence, and even during the tough graduate school years (with intermittent depressive blocks). Even when I was doing other things, writing always itched, and I knew I would have to come back to it, if not full time, at least steadily. I have.

2. What’s your favorite thing about being a writer?

Cliché as it may sound, my favorite this is the writing itself. Like every other writer, I want publishing, recognition, money, fame. But having had a little of these, also like other writers who have had a lot more (such as Anne Lamott and Julia Cameron), I realize that after all the excitement and momentary exhilaration, nothing satisfies like the writing process itself.
I learned this shocking truth when the first edition of my children’s book Tyrannosaurus Wrecks: A Book of Dinosaur Riddles (Crowell/Harper/Collins) came out. A great publisher, great publicity, great advance sales. I received an avalanche of congratulatory calls, letters, and flowers and three invitations for newspaper interviews. And more—my editor informed me the book would be featured at two prestigious New York City book fairs, complete with high-flying “Tyrannosaurus”-inscribed balloons.
I felt special and important, reveling in all the busyness and attention. But after a while, I ate too much, slept too long, and snapped at everyone within mouthshot. In the midst of all the fanfare, I yearned only to go back to the park in which I’d written most of the book. I’d sat under a tree, takeout coffee at my elbow, clipboard balanced on my knees. That was true joy.

3. What professional accomplishment are you most proud of?

The accomplishment is having finished my first book, Trust Your Life: Forgive Yourself and Go After the Dreams (pardon the plug). I was always a short-thing writer: essays and stories. One of the reasons I gravitated to them was the short-term reward. You write intensely for a little while, you revise a few times, and you’re done and can send it out. But a whole book! To stick with it in sustained effort seemed insurmountable.
Finally, though, after some straight-talk self-talk, I realized a long book is only a series of short things. This realization doesn’t diminish the thinking and figuring out necessary for a coherent series of short things. But listening to my self-talk, I felt my paralysis dissipate at the thought of writing an entire book. Little by little, as I divided the long thing into manageable short sections, I did. And then a second. And am on my third. 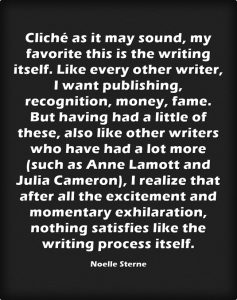 4. What would it surprise others to know about you?

Intellectual, bookish, usually polysyllabic, unable to tolerate any music but classical (and I don’t mean the Rolling Stones), last year I discovered a love of basketball. It may have had to do with the spring playoffs and the magnificent LeBron James (whatever you may think of him). I was glued to the television when I should have been writing. I’ve followed the trades and 2016 Olympic competitions, and even watched the NBA summer league games introducing new players (did you know there were summer league games?).
My writing photographic memory (recording a shy girl’s smile on a bus, an old man’s shuffle in the market) spilled over into effortless remembering of the players’ names, and now I talk sports with jock neighbors. I go to a local sports bar with my husband the baseball maven who’s now has gotten the basketball bug. We order light beers, eat the free peanuts, and hunch over the bar with eyes following darting among the three giant screens that catch the plays from every angle. And we talk Bball with anyone who’s similarly hunched over.
Lest you’re secretly thinking (as I do), “What a waste of time!” let me reassure us
both on the writing value of this obsession. Following post-game interviews, I’ve gained impetus for writing(!). James’ humble words after the amazing Miami Heat win in Game 7 of the 2013 championship series, with 28 seconds remaining and many Heat fans having walked out, led me to a column on writing perseverance. And I’ve got basketball notes from more recent interviews (stars playing since they were age 3) for an article on how one’s writing mission can start as early.
Now I can’t wait for the end of October when the fall season starts.

In high school, I went to a Saturday conference for aspiring writers, and one of the speakers, an English teacher, invited the audience to send her our work. How I mustered the courage I still don’t know, but I sent her four poems. A week later, to my astonishment, I received a two-page 8½ by 11 letter, the lines tightly handwritten. She critiqued my poems thoroughly, with even a few compliments. At the end of the letter, she wrote words I may not always have followed, but they remain the best advice I’ve ever received:
Above all, have faith in yourself.

Thank you for this opportunity, Jennifer.

It was my pleasure, Noelle.

Author, editor, writing coach and soother, dissertation nurturer, and spiritual counselor, Noelle Sterne publishes writing craft, spiritual articles, essays, and stories in print and online publications. With a Ph.D. from Columbia University, Noelle assists doctoral candidates in completing their dissertations (finally). Based on her practice, her current handbook addresses these students’ largely overlooked but equally important nonacademic difficulties. Challenges in Writing Your Dissertation: Coping with the Emotional, Interpersonal, and Spiritual Struggles (Rowman & Littlefield Education, 2015). In Noelle’s Trust Your Life: Forgive Yourself and Go After Your Dreams (Unity Books, 2011), she helps readers release regrets, relabel their past, and reach lifelong yearnings. Visit Noelle at www.trustyourlifenow.com

Depressed about your writing? Buried under an … END_OF_DOCUMENT_TOKEN_TO_BE_REPLACED